We Become Who We Worship 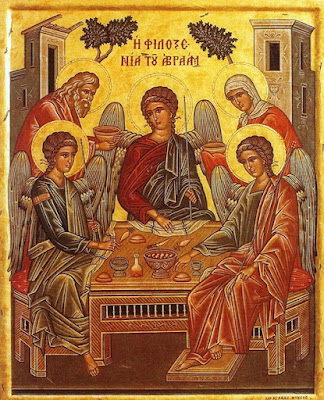 The Church deems it proper that, at least, once a year we celebrate and reflect on the most profound mystery of our faith: the Holy Trinity. I would like to begin by saying what the Trinity is not.


First, it is not a mathematical conundrum. 1+1+1=1 doesn’t make sense because the Trinity is not a math equation. Second, it is not a logical fallacy. For three persons in one substance may sound confusing but not an ontological contradiction, and with God nothing is impossible. Third, it is not a mere human construct. It didn’t start with the Council of Nicea and even less with the Roman Emperor Constantine – as claimed by some conspiracy theorists and non-Trinitarian sects.


1. We believe in the Trinity because this is how God chooses to reveal Himself.


First, God revealed Himself to us as Father: creator of everything, provider of our needs, liberator from oppression. Then Jesus Christ came as the fullness of revelation, teaching the people to call God as Abba, a personal Father, loving, forgiving, merciful, and faithful.


He overturned the popular notion of the long-awaited messiah from a folk hero-king to a suffering servant, a persecuted prophet (much to the disappointment and consternation of many) who dies but then rose again, conquering sin and death. He called Himself the Son and taught that He and the Father are one. Even His enemies recognized that anyone who claims to have the power to forgive sins assumes to be God.


When He was about to end his earthly ministry, He promised His disciples that He will send another Advocate, His very Spirit, who will lead them to all truth. He sent them on a perpetual mission to spread the good news to all the nations and baptize in the name of the Father, the Son, and the Spirit. And when the Spirit descended, the Church too was born.


St. Paul in 2 Cor 13,13 greets the early Church in Corinth: “The grace of the Lord Jesus Christ and the love of God and the fellowship of the holy Spirit be with all of you.” It is the same greeting said by the priest at the beginning of the Mass.


Revelation is salvation. In John 3,16, Christ said: “God so loved the world that he gave His only Son, so that everyone who believes in him might not perish but might have eternal life.”


However, this belief is not just about intellectual assent or understanding doctrines. It is accepting Jesus as Lord and Savior, and following His way just as He followed the will of the Father. And then some. For faith in God is not just about believing and following, it is also about becoming. Or more precisely: we become who we worship.


If Genesis 1,27 says that human beings are created in the image and likeness of God, then the Trinity also points to our true identity. So what does it mean to have faith in the Triune God?


To believe in the Son means to grow in our concern for the lost and the least among us, to make friends of enemies, and to be willing to lay down our life for them.


To believe in the Spirit means to become seekers of truth and agents of transformation in our communities and the world.


This is how we are saved: by the saving power of the Triune God and by becoming who we worship.