From Guilt to Grace 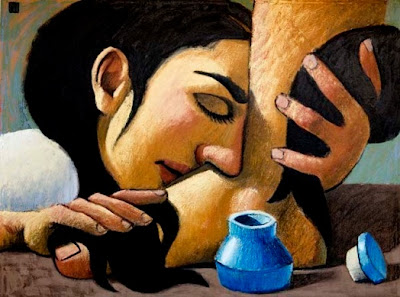 
Do you remember the last time you felt guilty over some wrongdoing? I doubt if anyone of us enjoys feeling guilty over something. It is an unpleasant feeling to say the least. Guilt prevents us from living life fully, and taken to extremes, it can make some people dysfunctional and immoblized.

That is why it is understandable that most of us try to avoid the feeling of guilt or shame. We devise coping mechanisms to get around it: denial, passing the blame, outright lie. In pathological cases, there are therapies devised just to handle and overcome guilt.

In our haste to eliminate uncomfortable guilt, some of us are led to think that when we rid ourselves of it, we can move on and lead happy lives. Not so fast. Guilt is also a natural human response. And there is such a thing as legitimate guilt.

The Jewish philosopher Martin Buber calls it “existential guilt”, which “occurs when someone injures an order of the human world whose foundations he or she knows and recognizes as those of his or her own existence and of all common human existence”.

When hurt is done or wrongdoing is committed, whether by malice or insensitivity, the one wronged feels his or her world is damaged, and so the victim becomes more cautious in making similar choices, less trusting with people, less optimistic about life. It is not only the wronged party who gets affected, but the wrongdoer as well. Something also becomes off in his or her world, and this manifests in guilt.

The prophet Nathan, in the First reading, was sent on a mission to show King David his existential guilt. He committed adultery with Bathsheba and sent her husband, a loyal general, to die in the battlefield to cover up their sin. David might have thought he got away with it. Nathan was sent so he won't get the wrong idea.

Guilt is our conscience tugging at us, an indicator that something is amiss in our moral compass. In the Gospel Reading, Jesus showed Simon the Pharisee how much his moral compass was amiss. He failed to see how he was rather dismissive of his guest, and scornful of the sinful woman. Jesus taught him that between his scorn for the sinful woman and the woman’s bizarre behaviour, it was the woman who has her priorities right.

1. Guilt is present not to make us feel miserable, but to help us seek forgiveness.

David, upon hearing Nathan’s indictment, felt remorse and said: ““I have sinned against the Lord.” As if to echo David’s remorse, the response to the Psalm this Sunday says: “Lord, forgive the wrong I have done.”

We Catholics are blessed to have the Sacrament of Reconciliation to satisfy our need for forgiveness. When was the last time you went to confession and beg God to forgive your sins? How regularly do you go to confession? Do you even consider the Sacrament important at all or it is just one of those quaint family traditions that you have to go through during Holy Week?

When we don’t satisfy our longing for forgiveness, our guilt will gnaw and nag at us. But it is not the worst thing that could happen. Worse is when our guilt disappears. When it happens, it means we have become desensitized to the sin we have done, and most likely, are still doing. And when the sense of guilt is gone, the next to go is the sense of God.

2. The point of forgiveness is not to assuage our guilt but to lead us to order our life for the better.

There is an oft-quoted prayer made by a young and newly-converted St. Augustine, at that time still recovering from the old habits of his former sinful lifestyle: "Lord, give me chastity, but not yet."

Sometimes we find it rather easy to ask for forgiveness but are not quite ready to put proper order in our lives just yet. There are also those who treat the Sacrament of Reconciliation as if it were some sort of spiritual washing machine.

God’s forgiveness – especially through the Sacrament of Reconciliation – is never about tolerating wrongdoing, nor is it a mere washing of dirty linens, or whitewashing old sins. Rather it helps us to rediscover the true purpose and meaning of our lives. In the Gospel accounts, when Jesus tells the sick and the sinners, "your sins are forgiven", He is giving them a new lease on life, or more precisely, He is leading them to a new life.

3. A decision to order our life for the better means welcoming God’s grace to enter our life and transform us.

Mahatma Gandhi tells this personal story: “When I was 15 years-old, I stole something. Because I was in debt, I stole a golden bracelet that belonged to my father. But I could not stand the burden of my guilt. So I went to him. But as I stood there, I was so ashamed that I could not open my mouth. So I wrote my confession down on a piece of paper. And while I was handling it to him, my whole body trembled. My father read the note, closed his eyes and then tore it to pieces. All he said was: ‘Think nothing of it.’ Then he took me in his arms, and from that moment on I began to love my father more than I had ever done before.”

Similarly, God forgives not so much because we are deserving or that we have done something good, but because it is in His nature to love us no matter what.

The sinful woman in the Gospel passage came to Jesus, weeping, anointing his feet with fragrant ointment, showing prodigious amount of love because even before Jesus articulated her being forgiven, she knew and felt that she was welcomed, accepted and loved by Him. This is the sense by which St. Paul proclaims in Gal 2,16: “we know that a person is not justified by works of the law but through faith in Jesus Christ.”

Ultimately what is being revealed here is an image of God: ready to forgive and reconcile with us, poised to give us His grace, intending to share with us His very life. What are we to do with a God like this?

A missionary once observed a Sunday Mass in Bolivia. His curiosity was piqued by the offertory procession of four teenage boys. Aside from the offering of candle, bread and cruets (water and wine), one of them held a rather large stone in his hands. When they reached the foot of the altar, they turned around and lifted up the offertory gifts for all to see. Only one of them speaks: the youth holding the stone. He prays:

“Father in heaven, this stone is also a gift from us. It represents us and our hearts. Enkindle in us a warmth for one another and never allow us to become or remain hard like this stone. On the contrary, may we continue to spread light and life. As we lay it on the altar, may our hearts be transformed just as the bread and wine will be. Amen.”

My suggestion for a fitting response to a God like this: follow Heb 3,7-8: “If today you hear His voice, harden not your hearts”.
divine inspiration hit firesetter at 3:14 PM 1 comment: