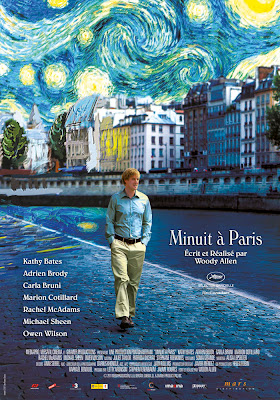 In between a busy day and a busier day next I find myself enjoying this film.
Yet at mid-movie I had to stop, in between Picasso and Gertrude Stein, after scenes with the Fitzgeralds and Hemingway. It was obviously contrived the way they talked like they wrote. But it was heady just listening to them, to Hemingway for example, and remembering how it was always a compliment to call someone’s writing Hemingwayesque. Nick Joaquin’s was a bit Hemingwayesque, or so I think; the late Bishop Pacis’ was definitely Hemingwayesque. And once in a while in my less gifted writing I try to keep the style in mind. But it is not about the style.
It is about the golden age, how every generation looks back
at one to contrast and attempt to escape from a dull present.
It was the character least liked of all, the pedantic one, who said it first early on, only to be realized near the film's end, as in a fable, by a starry-eyed Owen Wilson, playing half-naive, half-wise, for the nth time. Annoying in its irony, but that is the genius of Woody Allen. He has moved me enough to take another moment and look back at our nation's proffered golden ages, then at my busy day and the busier one ahead, and I just know in some future I shall be looking back and declare this day, amidst its dullness and turmoil, its complexity and campiness, I have a feeling that today stands in line with our generation’s current golden age.
29 November 2011
Chancery, Diocese of Legazpi
divine inspiration hit firesetter at 12:09 AM No comments: 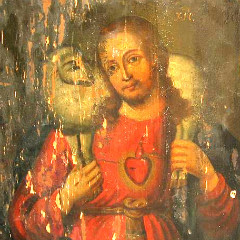 GOD has created, loved and sustained me.
He has called me
to deepen my friendship with Him, and
become a priest after His own heart
-- holy and wise, humble and loving.

Therefore, I commit myself to
fidelity in priestly life and passion for ministry
in the service of the
renewed integral evangelization,
and the building up of the
communion of communities
that is the Church.

Email ThisBlogThis!Share to TwitterShare to FacebookShare to Pinterest
Labels: personals

A Wedding Homily for Emman and Sarita Kare-Telado
St. John the Baptist Parish Church, Tabaco City
15 October 2011
St. Bernard of Clairvaux says “We find a home in those we love, and we provide a home for those who love us”. 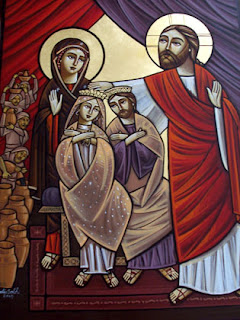 In many ways, Emman and Sarita’s wedding is a coming to a home, a homecoming, to their hometown, and to this very church. This is where they receive the sacraments: where Sarita was baptized, were both of them had first communion, received confirmation, and attended Sunday Masses with their families. Both of them and their classmates from grade school may still remember the many First Fridays when they had to cross the street from CCS to attend Mass here. Who would have thought at that time, that Emman and Sarita would find themselves together today in this church to receive the sacrament of matrimony and found a home, a family of their own?
Their love story is also a coming home to each other. Having been classmates in grade school, they went their separate ways through high school, college and work. Until that fateful class reunion in 2007. We’re not sure if there was any love at first sight for one or both of them. But we’re sure they are glad that they took a second look. After around two years, for Emman, after mustering the courage to say the right words and do the right moves; for Sarita, after getting to know again Emman much closer this time – they became a couple. After another two years, here we are today.

Restoring the Words and Repeating the Same Mistakes

Anthony Esolen at First Things belabors the over-all superiority of the new English translation of the Roman Missal over the one used for 40 years in English-speaking countries. I do get the feeling though that the majority consensus already among Catholic liturgists today is that the soon-to-be-replaced translation does need some changing. 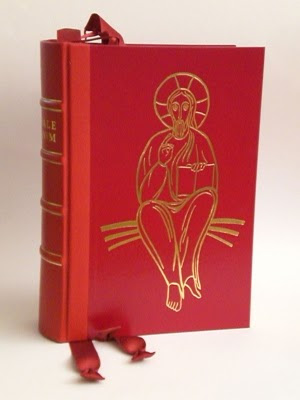 Though much may be said about its form and content, I will limit my comment on the process through which this new translation came about.

Esolen prefaced his arguments with a well-chosen passage from Orwell's novel 1984, and this rather dramatic narration of what happened years ago:

"Some forty years ago, a team of men was charged with rendering the Latin of the Catholic Novus Ordo Mass into English. They did so, dully and inaccurately, for the common prayers spoken by the people at every Mass. But when they worked just beyond the view of the people, they became different men altogether. Then they felt the fire of zeal. The prayers spoken by the priest—the collects, offertories, prefaces, postcommunions, special blessings, and even the eucharistic prayers—gave them a vast field to ply their talents."
Convincing enough if not for the fact that take away the "some forty years ago", replace it with a more recent date, and he may as well be talking about how the new translation came to be. Consider these:

Case in point: Esolen praises this new translation of the Prayer after Communion for the First Sunday of Advent 2011 (incidentally, the official start of the new translation's implementation in the US). He describes is as a "splendid work", both "accurate and profoundly scriptural":

May these mysteries, O Lord,
in which we have participated,
profit us, we pray,
for even now, as we walk amid passing things,
you teach us by them to love the things of heaven
and hold fast to what endures.

Anthony Ruff, OSB, at the Pray Tell blog describes it this way: "The word order (in the new translation) is so messed up that the prayer seems to say we learn to love the things of heaven from the passing things of this world – but the Latin prays that it be from the mysteries celebrated in the liturgy!"

The new one is, of course, better than the current (soon to be passing):
Father,
may our communion
teach us to love heaven.
May its promise and hope
guide our way on earth.

Somebody points out, a better translation could have been this:
Lord, may the celebration of these mysteries
profit us, we pray,
since through them you teach us,
on our journey through this passing world,
to love the things of heaven
and hold fast to what endures.


Let's read Esolen's words again (this time with some personal and arbitrary changes):

"Some four years ago, a team of men was charged with advising on the new rendering of the Latin of the Catholic Novus Ordo Mass into English. They did so, dully and inaccurately, for the common prayers spoken by the people at every Mass. But when they worked just beyond the view of the people, they became different men altogether. Then they felt the fire of zeal. The prayers spoken by the priest—the collects, offertories, prefaces, postcommunions, special blessings, and even the eucharistic prayers—gave them a vast field to ply their talents."

When will we ever learn?